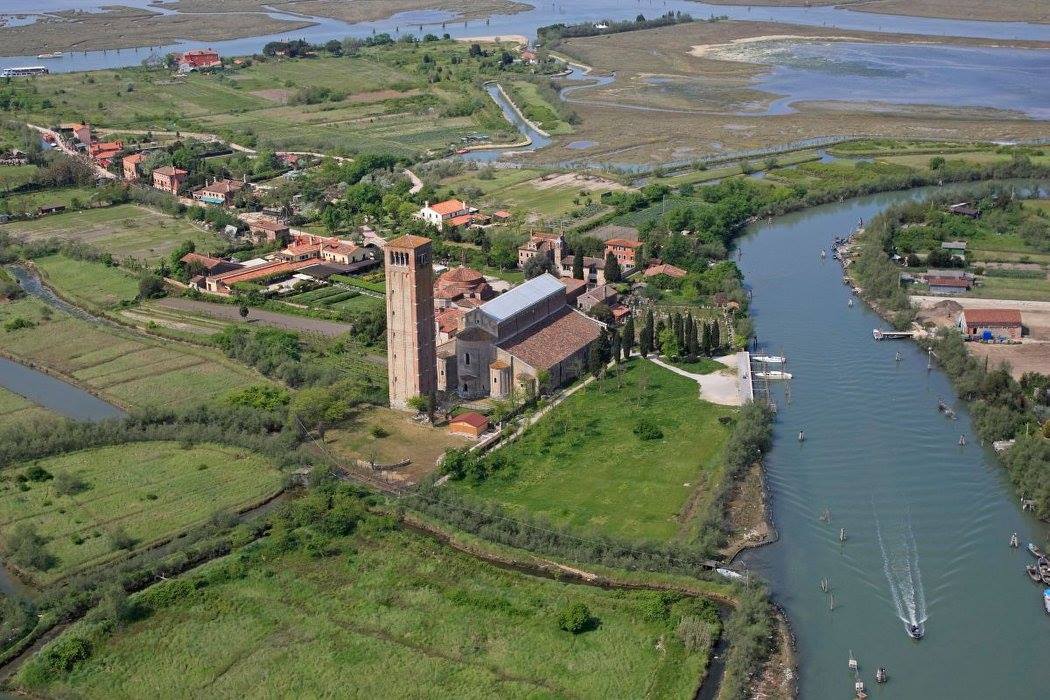 A silent and peaceful corner of the Venetian lagoon, Torcello is an island of decadent charm, among the most captivating of the Venetian archipelago. Walking through the streets of this small island, today mostly uninhabited, is like taking a plunge into the past: the atmosphere of Torcello is suspended in time and its calm is interrupted only by delicious restaurants and a few characteristics inns. A history of ups and downs and a spectacular location make Torcello a point of interest not to be missed during a stay in Venice.

The fascinating history of Torcello

It seems impossible to think that once upon a time this quiet island of Venice today populated only by a few tourists and a handful of inhabitants was once one of the liveliest islands in the Venetian lagoon. Torcello was inhabited since the early moments of the Roman Empire and it was under the pressure of the barbarian invasions that in 638 the bishop of Altino, at the time the main Roman city in the lagoon area, moved to Torcello followed by a large part of the population of the town: from the seventh century, there was then a vibrant population of the island, made up of reclamations, creation of orchards and terraces, and a flourishing commercial and urban development.

Torcello experienced a prosperous development, reaching about 20,000 inhabitants, and was the fulcrum of a lively commercial, artistic and cultural life, until from the fifteenth-century health problems related to the unhealthy marshy air and the proximity of large centers such as the now flourishing Venice led to a progressive decline of this island. Most of the buildings in Torcello went to ruin or were looted to provide building material for a rapidly growing Venice. Despite this, the island still retains its unmistakable personality and exudes a climate full of charm.

What to see on the island of Torcello

Despite decades of raids and semi-abandonment, today Torcello is able to offer its visitors breathtaking scenery and enchanted corners. One of the oldest buildings on the island is the Basilica of Torcello, dedicated to Santa Maria dell’Assunta. Founded in 639, it is a marvelous Venetian-Byzantine building with a three-nave plan. The building contains many precious artistic works, among which the mosaic of the Last Judgement stands out, immersed invaluable architectural elements and an air of deep spirituality. Not far away, climbing up the square tower of the 11th-century bell tower you can observe a decidedly splendid panorama of the surrounding lagoon.

The Church of Santa Fosca is also worth a visit. Dating back to the year 1000, it is the result of the cult of saints Fosca and Maura who established themselves on the island around the eleventh century. Also near the two mentioned churches, there is another of Torcello’s symbols, the famous Throne of Attila. It is an imposing stone seat which, despite its name and the legends that hover around it, has nothing to do with the King of the Huns: the throne, dating back to the 5th century, was probably used by the Bishop of Torcello or the governor when carrying out court proceedings or meetings.

Few people today resist the temptation to have their photo taken sitting on the royal boulder, which stands silently in the middle of a grassy clearing in the heart of the Venetian island. Of interest in Torcello are also the palaces that together form the Museum of Torcello: the Palazzo del Consiglio, built in the 15th century in the Gothic style to house the government of the island, and the Palazzo dell’Archivio, with its typical structure of a 13th-century public building and once the seat of the archive of the Bishop of Torcello. The Museum of Torcello collects numerous finds from the Latin, Byzantine, and Medieval periods, and is divided into sections of great value including the Archaeological, Medieval and Modern Sections.

It is impossible to leave Torcello without a stop in a place as beautifully landscaped as it is shrouded in mystery: the Devil’s Bridge. Numerous local legends give this small bridge without parapets a very particular aura. It is said that during the Austrian domination a Venetian girl fell in love with an enemy soldier, who was killed by her family to prevent this unpatriotic love. The young woman then turned desperately to the help of a sorceress: I met her on the bridge, the sorceress invoked the devil himself and he made the young Austrian appear, who took his beloved away with him. In exchange for the favor, the devil asked the sorceress to provide him every year for seven years with the soul of a child who had just died on the evening of Christmas Eve, but the sorceress died shortly afterward, leaving the devil unsatisfied with her request. It is said that he still wanders around the bridge on the night of December 24th in search of the souls that he thinks the ghosts.

Other versions of the myth want the bridge to have been built by the Devil himself, who in a single night began the work but could not finish it by dawn, leaving the bridge unprotected of parapets. Popular tales really thrilling, which make the place unmissable for lovers of this kind of suggestion, but also for anyone who wants a virtually perfect view to enjoy in relaxation and immortalize in endless shots.

How to get to Torcello

Torcello is located a few minutes from the splendid Burano, and is set in the suggestive panorama of the Venetian islands. It is easily accessible by ACTV Vaporetto from the city. The route to get there is the same as the one used to get to Burano: from the Fondamenta Nove area of Venice you can take the line 12 to the island of Burano and from there the vaporetto line 9 to Torcello, leaving about every 30 minutes. The journey from Venice to Burano takes about 50 minutes, while from Burano to Torcello only 5 minutes. An excellent alternative way to visit Torcello is to take part in a boat trip that plows through the Venetian waters for a tour of the most beautiful islands of the lagoon. There isn’t one that doesn’t deserve a stop, and that isn’t able to give you unforgettable views and travel moments to say the least.