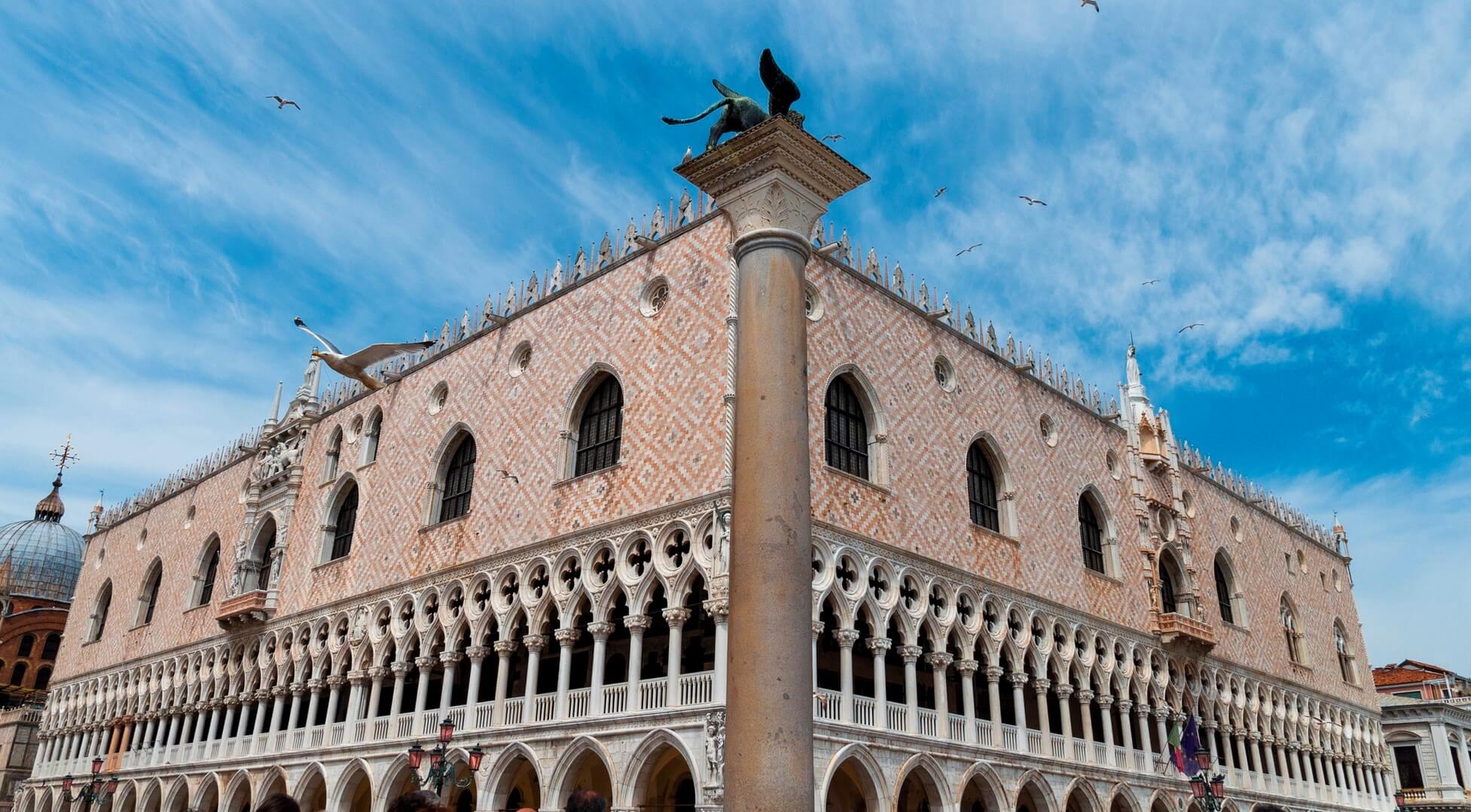 The splendid and ancient Doge’s Palace, also called Palazzo dei Dogi, dates back to the 10th century. Together with the Basilica of San Marco is the place-symbol of the city. For eight hundred years, in the different phases of its development, it was the Doges’ seat and the ancient seat of the Venetian Magistracy, the highest representation of Venetian civilization, its cultural, artistic, military, political, and economic history.

All historical periods are represented in an extraordinary stratification of constructional and ornamental elements: from the original ancient foundations to the magnificent Gothic structure of the whole. From the enormous halls of the institutional life of the city, superbly decorated by great masters – including Titian, Veronese, Tiepolo, Tintoretto – to the precious rooms of the Doge’s Apartment; from the disquieting prisons, where Giacomo Casanova, among others, was imprisoned, to the luminous loggias overlooking the Piazza and the lagoon. The use of the arches almost seems to defy the law of gravity, and one realizes that the entire palace is a jewel of civil architecture. The visible color contrasts can hardly be captured with a camera. Today the palace houses the most visited museum in Venice, the Civic Museum of Palazzo Ducale, with over a million and a half visitors a year.

The Doge’s Palace, formerly the Doge’s residence and Palace of Justice, and the seat of the organs responsible for guiding the city, through its complex architecture, emblematically reveals the history of public and political life in Venice. Originally, when the government settled in the lagoon area, it had a fortified structure with watchtowers at the corners and consisted of a group of buildings inside used for different functions.

It was largely rebuilt during the twelfth century because of a serious fire that had destroyed it; it thus lost its connotation of the fortress and was confirmed to the architecture with open loggias, already realized in the city, linked to Venetian-Byzantine stylistic canons. The restructuring proceeded without continuity until the end of the fourteenth century, when the palace was imposed on the basin with its vast front porticoed and opened by a continuous loggia. Still incomplete was instead the prospectus towards the Piazzetta that was realized in the following century when, enlarging the original structure, assumed the present dimensions. 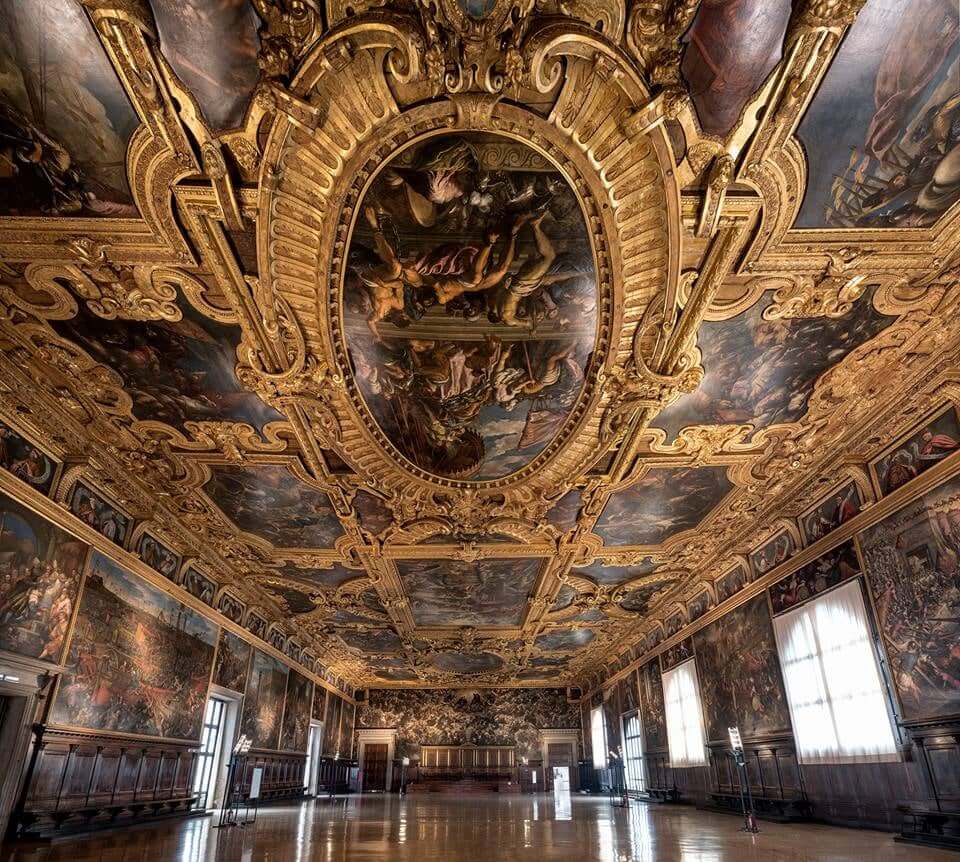 The two porticoed facades, decorated with a repeated geometric motif in white and pink stone and crowned by battlements, denote the refined refinement of the architectural structure, embellished by the sculptural interventions, works of famous stone masters. The interior of the palace, which is accessed through the imposing Porta della Carta, made by the Bon and originally polychrome, beyond the portico Foscari, is organized around the beautiful courtyard on which overlook the articulated facades and the Scala dei Giganti, so named for the two statues of Mercury and Neptune, made by Jacopo Sansovino in 1566. The courtly and sumptuous ensemble, with its imposing stone facade designed by Antonio Rizzo, who Longhena and Scarpagnino succeeded, and the other Gothic brick facades, opened by a portico by Monopola in the 16th century, is the striking result of a desire to exalt the wealth and power of the city government.

An integral part of this celebratory program is the palace’s interior, the ducal apartment, and the entire series of rooms that make up the first and second piano nobile. These rooms, for the richness and variety of the works preserved there, provide us with a truly unique image of the artistic civilization of Venice during the 16th century; a civilization expressed here, in the highest secular temple of the Serenissima, as if to ennoble, through the splendor of a unique season of the spirit, the ephemeral concreteness of its political fortunes. 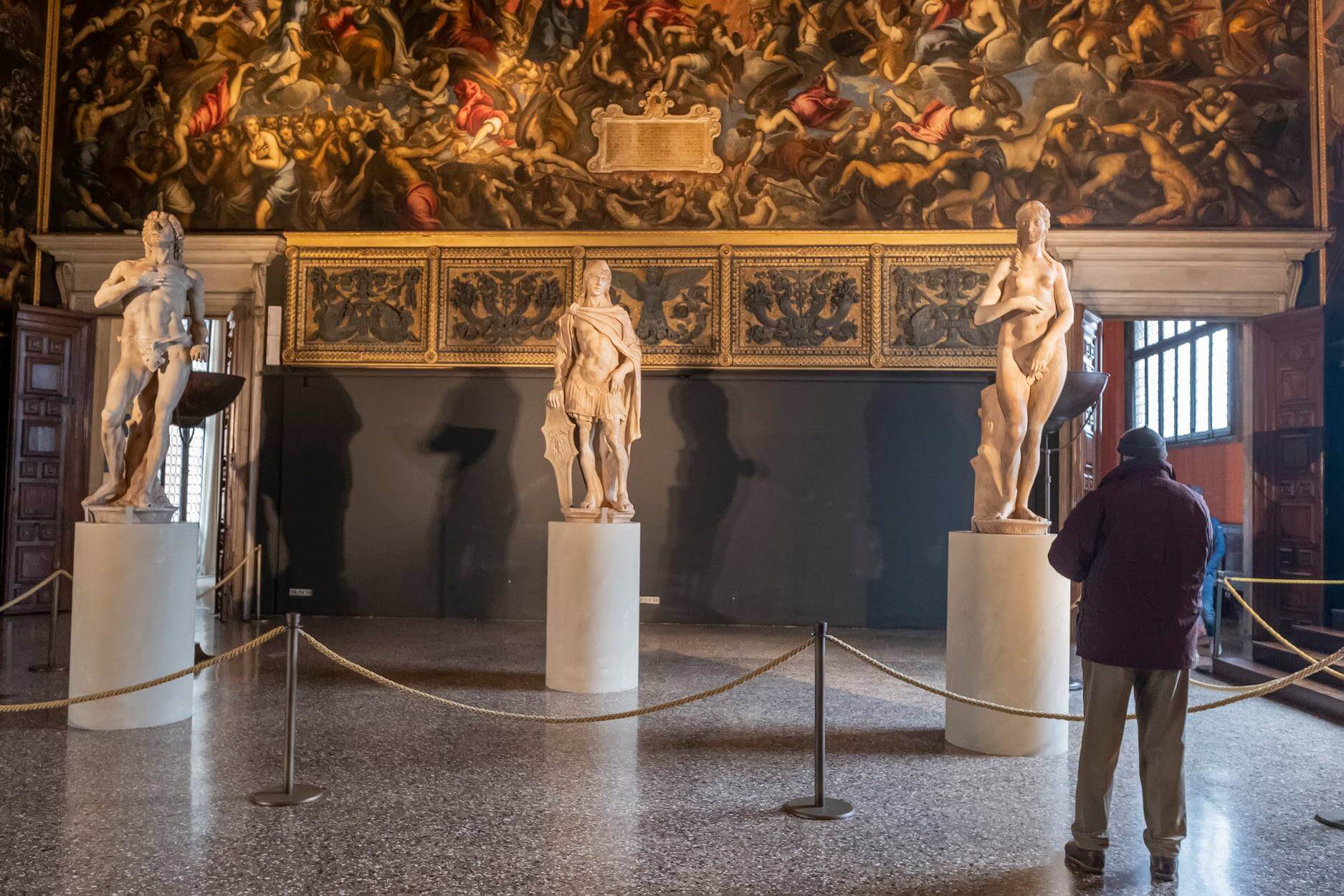 More than sculpture – although represented at the highest level by Antonio Rizzo’s Adam and Eve, absolute masterpieces of the early Venetian Renaissance (1468); by the refined elegance of the Lombardo father and sons (bas-relief with Doge Leonardo Loredan, by Pietro, the marble fireplaces by Tullio and Antonio); by the portrait excellence of Alessandro Vittoria (bust of General Sebastiano Venier, 1577) – it is the painting that gives us, emblematically, the measure of this exceptionality. Through the works of the two Palms (Jacopo Palma the Younger and Jacopo Palma, the Elder), of Giovanni Antonio de’ Sacchi’s, known as Pordenone, of Jacopo Bassano and Bonifacio Veronese, it reaches its highest points with Titian’s large canvas depicting The Doge Grimoni Presented to the Faith by Saint Mark (Sala delle Quattro Porte) and with Paolo Veronese’s luminous, sunny Apotheosis of Venice in the Sala del Maggior Consiglio. Also in this room, the monumental, abnormal composition of Paradise, completed by Jacopo Tintoretto with the collaboration of his son Domenico between 1588 and 1590, rises almost to the pathetic testament of the city, in an attempt to exorcise the dark forces of a descending parabola that was already underway.